The black ring magic prophet Seer 1 arrested in South Africa for miracle money laundry. This occured during Sunday service after he had collected R10,000 from a member in exchange of R100,000 miracle money. Unfortunately for the victim, the R100,000 she collected from Seer 1 turn back into pices of papers as minutes after she got home. She then alerted the South African police who arrested prophet Seer 1 and he is now under their costudy.

This is the same prophet who claimed to have given a magic ring to Zambian officials that helped them win in the 2016 elections. 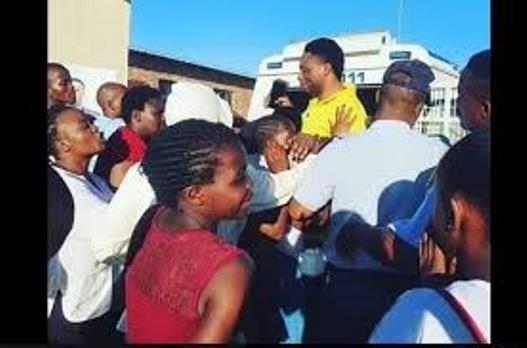 Sunday service was unusual for the members of Limpopo’s suspiciously fastest growing church of (Prophet Anointed CFM) in South Africa as police came to the church and got their prophet Seer 1 arrested for an alleged miracle money laundry crime.

In a video circulating the media, one woman named Memory claimed that he took the sum of R10.000 to the Prophet who in turn, brought out a series of news papers and after chanting some strange words changed the papers to money.

I was excited, but I got the shock of my life when I reached home and opened my bag, all the money was again turned to papers.

I called the prophet several times to report to him that all the monies were now papers but he did not pick up his phones.

I went to the church to meet him and I was beaten up by his securities and body guards, this prompted me to report the matter to the authorities.

I am glad that Seer1 was arrested on Sunday.

Our news editor can confirm that through a Facebook post posted on the Prophet’s Facebook page @Prophet Anointed CFM that Seer 1 has been arrested in South Africa and currently in the police custody.

The arrest of prophet Seer 1 in South Africa has left many people wonder if he actually possess all the powers he claims to have.

How to overcome the spirit of poverty and debt

10 Tips To Be Successful

5 Financial Risks Every Business Should Avoid

The Difference Between Wealth And Poverty