As President, he lowered his salary to only $450 a month and limited his possessions to a car, four bikes, three guitars, a fridge and a broken freezer. A motorcyclist himself, he formed an all-women motorcycle personal guard. He required public servants to wear a traditional tunic, woven from Burkinabe cotton and sewn by Burkinabe craftsmen. He was known for jogging unaccompanied through Ouagadougou in his track suit and posing in his tailored military fatigues, with his mother-of-pearl pistol. When asked why he didn’t want his portrait hung in public places, as was the norm for other African leaders, Sankara replied “There are seven million Thomas Sankaras.” 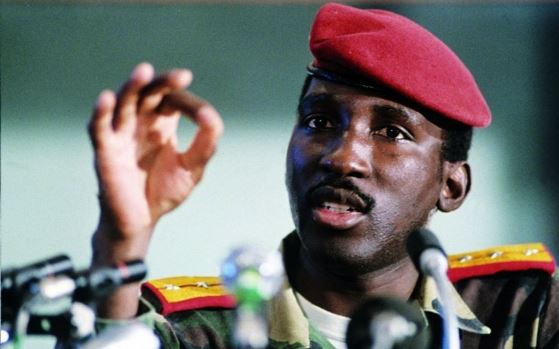 Sankara rejected the idea of foreign aid, saying that “he who feeds you, controls you.” Wheat production rose in just three years from 1700 kg per hectare to 3800 kg per hectare, making the country food self-sufficient. He spoke eloquently in forums like the Organization of African Unity against continued neo-colonialist penetration of Africa through Western trade and finance. He called for a united front of African nations to repudiate their foreign debt. He argued that the poor and exploited did not have an obligation to repay money to the rich and exploiting.

In Ouagadougou, Sankara converted the army’s provisioning store into a state-owned supermarket open to everyone (the first supermarket in the country). He forced civil servants to pay one month’s salary to public projects. He refused to use the air conditioning in his office on the grounds that such luxury was not available to anyone but a handful of Burkinabes.

He sold off the government fleet of Mercedes cars and made the Renault 5 (the cheapest car sold in Burkina Faso at that time) the official service car of the ministers. He reduced the salaries of all public servants, including his own, and forbade the use of government chauffeurs and 1st class airline tickets. He redistributed land from the feudal landlords and gave it directly to the peasants.

Sankara was assassinated by agents of imperialism in coup plot orchestrated by France on October 15, 1987.